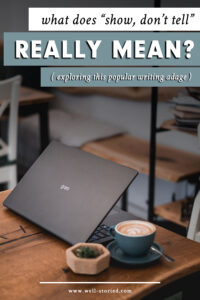 This popular writing mantra claims to be the key to rich and immersive storytelling, but what does “Show, Don’t Tell” actually mean? Is it a technique you should truly pay mind as you work to improve your skills? And if so, how can you employ this popular piece of advice in a way that doesn’t feel contrived? Let’s discuss everything you need to know in today’s article, writers.

The rise of the “Show, Don’t Tell” technique…

The origin of this popular piece of writing advice is a hazy one. Despite attributions to Anton Chekhov, it appears that Percy Lubbock’s book The Craft of Fiction popularized this adage back in the 1920’s. Regardless of its origin, the fact remains that this advice has steadily built its home in the Western world’s collective writing consciousness for the past one hundred years or so.

That makes it worth looking into, right? Though any cold, hard data is largely lacking, it’s my belief that “Show, Don’t Tell” became popular writing advice because of the rise of film and television. Prior to the modern age, novels were largely framed as retellings, with a godlike narrator or in-the-know character literally telling readers (and, at times, other characters) the story at hand.

As film and television came into prominence, however, storytelling became more and more experiential, with readers wanting to “see” the story rather than “hear” it told. Thus, novelists began to reframe their stories as in-the-moment experiences, giving rise to techniques such as deep point-of-view, subjective storytelling, and film-to-fiction principles.

Subscibe to The Editor’s Desk

Enter your name and email and get the Elements of a Good First Page Presentation!

Introduce yourself and your program
Your information will *never* be shared or sold to a 3rd party.